The Story of Jonah and the Whale 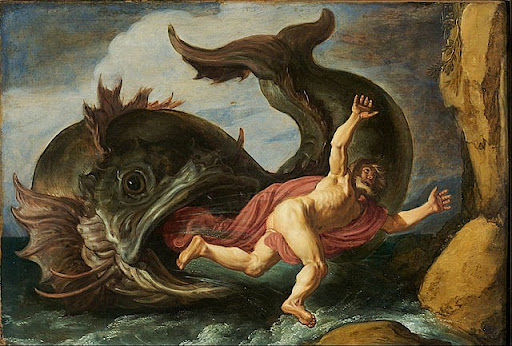 The story of Jonah and the whale is about a Hebrew prophet named Jonah, who God commands to travel to the great city of Nineveh to preach repentance to its inhabitants because of their wickedness.

Jonah instead refuses God’s mission and tries to escape by boarding a ship traveling in the opposite direction.

During his sea journey, a great storm appears, and Jonah is thrown overboard and swallowed by a huge fish (or whale).

He remains in the belly of the fish for three days and nights until he asks God for forgiveness. Jonah's rescued and completes his mission in Nineveh with some reluctance.

This article considers this famous Bible story, its meaning, the moral behind Jonah and the whale, and what relevance it has for Christians today.

What is the story of Jonah and the whale in the Bible?

Jonah’s story is in the Old Testament in the Book of Jonah.

It is also referred to in different parts of the New Testament, including:

In the New Testament, we see comparisons of Jonah’s incarceration inside the whale and Jesus’ death and resurrection three days later.

Jonah’s adventure starts when God commands Jonah, son of Amittai, to travel to the great city of Nineveh and preach repentance to the people (Jonah 1).

However, Jonah disagrees with God. He doesn’t believe that the Ninevites are worthy of salvation because Nineveh was the capital city of one of Israel’s enemies, the Assyrian empire. They were also a very wicked city at this time.

Jonah instead decides to disobey God and travels in the opposite direction to Joppa, a seaport in Israel, where he boards a boat bound for Tarshish.

During his journey, a violent storm threatens to capsize the ship. The sailors ask for help from their own gods, but in the end, they discover that Jonah’s actions caused the storm (Jonah 1:4-6).

In despair, Jonah tells the sailors to toss him overboard to save their ship.

They initially refuse. Later, fearing all is lost, the sailors toss Jonah overboard into wild seas (Jonah 1:15). Then, the ocean miraculously becomes calm.

God rescues Jonah from drowning by providing a “huge fish to swallow Jonah, and Jonah was in the belly of the fish three days and three nights” (Jonah 1:17).

While in the body of the whale, Jonah prays to God and asks for forgiveness.

Jonah 2:7 captures Jonah’s desperation: “As my life was slipping away, I remembered the Lord. And my earnest prayer went out to you in your holy Temple.”

While in the body of the great fish, Jonah laments being “banished from [God’s] sight” (Jonah 2:4). Being banished from God’s sight represents what happens to Christians who abandon or disobey God.

This piece of Scripture also shows Jonah’s humility and obedience to Jesus, which helps him atone for his earlier refusal to listen to God.

God then commands the whale to release Jonah onto dry land. After his rescue, Jonah offers a prayer of thanksgiving where he praises God, ending with the prophetic statement, "Salvation comes from the Lord” (Jonah 2:2–9).

Jonah then travels to Nineveh and warns the city’s inhabitants that they must repent or risk having their city destroyed in 40 days. The King of Nineveh heeds Jonah’s warning and immediately dons sackcloth and ashes, instructing the Ninevites to do the same. They follow suit and show repentance to God.

God sees the repentance of the Ninevites and spares them from destruction (Jonah 3:10).

What is the meaning of the story of Jonah and the whale?

The meaning of the story of Jonah and the whale becomes clear in the final sections of the Book of Jonah.

From Jonah 4:1 onward, we see that Jonah is angry that God shows mercy to Nineveh. Jonah has completed his mission, although with some misgivings — Jonah doesn’t believe the Ninevites deserved God’s mercy.

God disagrees, arguing that all humanity is worthy of salvation.

God’s closing message in the Book of Jonah 4:11 is: “And should I not have concern for the great city of Nineveh, in which there are more than a hundred and twenty thousand people who cannot tell their right hand from their left — and also many animals?”

Here, God tells us that we are all worthy of redemption if we show repentance for our sins.

For God loves us all and will not abandon us if we heed unto Him.

In Matthew’s gospel, Jesus compares Himself to Jonah and compares His generation to the people of Nineveh. Nineveh repented, but Jesus's generation didn't heed the word of the Lord.

The biblical story of Jonah and the whale is fundamentally about rebirth and redemption, as well as following God.

What is the moral of the story of Jonah?

The moral of the story of Jonah isn't just about the consequences of showing disobedience to God, as Jonah does initially.

The story shows us that God’s love, grace, and compassion extend to everyone — even the wicked Ninevites who Jonah doesn’t believe are worthy of salvation.

Jonah didn’t believe that God’s judgment towards the Ninevites was fair. He thought that Nineveh was full of depraved sinners unworthy of redemption. God disagreed. And, the city of Nineveh repented after Jonah gave his warning to them.

The themes of forgiveness and redemption are part of the central message in the story: God loves all humanity.

Another underlying moral is that you can’t outrun the will of God. Jonah tried and failed miserably. When Jonah understood the consequences of his actions, he was saved.

Jonah thought he knew better than God. But in the end, he learned a valuable lesson about the Lord's mercy and forgiveness, which extends beyond Jonah and Israel to all people who repent and believe.

Jonah’s rescue from the belly of the whale also illustrates the power of prayer, containing a powerful message for Christians today. If we ask for God’s help, He’ll answer our prayers.

The lesson that Christians can learn from the story of Jonah and the whale is that you can’t outrun God.

You'll pay the price for disobedience, but God will forgive you. God is an all-powerful but also a forgiving God — even of people or communities who are wicked and sinful.

Jonah’s time inside the belly of the whale for three days and nights is predictive, perhaps, of the ordeal of Jesus Christ in His death and resurrection.

Jonah is just an ordinary sinner, like all of us. His story shows that we can all be saved by Jesus Christ if we follow Him.

If you want to learn more about popular Bible stories like Jonah and the whale, download the pray.com app — for daily prayer, bedtime Bible stories, and more — in the Google Play and Apple Store.