Prayer to Saint Michael For Protection 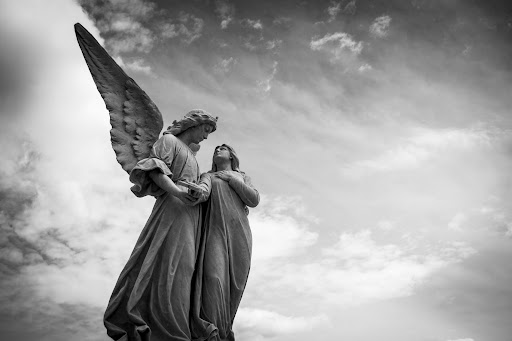 The Archangel Saint Michael is one of the most commonly seen saints on prayer cards and pendants. He is highly represented in art throughout the centuries as well. There is even a feast in his honor held every year on September 29.

Prayers offered up to Michael the Archangel are typically for protection, but he means so much more to the Christian faith. In this article, we will examine who the Archangel Michael is, what his impact has been on the Christian community, and provide you with prayers that you can use when offering thanks to the archangel and beseeching him for help in your daily life.

Who is the Archangel Michael?

We often pray to the archangel, but have we ever asked ourselves who is the Archangel Michael? Saint Michael made his initial appearance in the Old Testament. In the Book of Daniel, also known as The Prophecy of Daniel, the archangel is mentioned three separate times. Daniel has a vision of Saint Michael and describes him as the protector of the Israelites.

The archangel is also mentioned in the New Testament's Book of Revelation, where he leads almighty God's heavenly army against the Devil and defeats evil.

It is in the Epistle of Jude where Michael is called an archangel for the first time. Defeating Satan led to the archangel's role as a protector and the leader of God's army. This is why Christians know Saint Michael as a protector against the forces of darkness and evil and call upon him in times of spiritual warfare.

Saint Michael is the archangel of police officers, military personnel, grocers, mariners, and paratroopers. In fact, many Catholics in these professions and line of duty carry the archangel's prayer card in their wallets or wear his image on a pendant around their necks.

Some have even gotten his name or likeness tattooed on their bodies to honor him for his protection.

Saint Michael the Archangel is also commonly known as the protector of every faithful soul. He protects saints from assaults by Lucifer and actively protects the church against evil spirits. This is why his strength and protection are called upon in exorcisms.

In fact, there is a prayer to Saint Michael in the Rite of Exorcism in the Roman Ritual. This ritual continues to be used to this day in an edited form from revisions made in 1999 during modern exorcisms by the Catholic church.

What does Saint Michael symbolize?

Saint Michael symbolizes the triumph of good over evil.

The archangel has been depicted in many famous pieces of art brandishing a sword or spear over Lucifer, who is represented as a beast, dragon, or man with wings.

Saint Michael has even been portrayed standing triumphantly over other fallen and rebellious angels. The shield Saint Michael is often depicted holding bears the Latin phrase Quis ut Deus, translating to Who is like God?

When we pray to Saint Michael the Archangel, we often pray for protection for ourselves and our families.

However, we do not just pray for protection in a general “mortal” sense of the word. We also pray for protection against malevolent forces. Personal consecration to the archangel can help us overcome our most difficult struggles and spiritual battles.

Hymns and prayers to Saint Michael the Archangel

The Archangel Saint Michael is highly celebrated in the Christian community, particularly among Catholic prayers.

The Catholic Church features many hymns and prayers dedicated to the archangel, including the hymn of Roman Liturgy.

O Jesus, life-spring of the soul, the Father's power and glory bright!

Thee with the angels we extol; from Thee they draw their life and light.

But Michael bears Thy standard dread, and lifts the mighty cross on high.

He in that sign the rebel powers did with their dragon prince expel;

and hurled them from the Heaven's high towers down like a thunderbolt to Hell.

Grant us with Michael still, O Lord! against the prince of pride to fight;

So may a crown be our reward, before the Lamb's pure throne of light.

To God the Father and the Son and Holy Paraclete to Thee,

as evermore hath been before, be glory through eternity.

The prayer to Saint Michael the Archangel listed below comes from Pope Leo XIII himself. While this is not the only prayer dedicated to the archangel, this particular prayer is the most notable. It is used to protect the soul in times of spiritual warfare and was recited after Low Mass in the Catholic Church from 1886 to 1964.

defend us in the hour of conflict.

Be our safeguard against the wickedness and snares of the devil

(may God restrain him, we humbly pray):

and do thou, O Prince of the heavenly host,

by the power of God thrust Satan down to hell

and with him those other wicked spirits

who wander through the world for the ruin of souls.

In late September 2018, Pope Francis asked Catholics the world over to pray the Rosary every day, which included the Leonine prayer to Saint Michael. The reason for doing so is to “preserve her (the Church) from the attacks by the devil.”

Even those who do not consider themselves Catholics or Christians are familiar with the archangel. In many horror movies, Saint Michael is called upon by priests for strength.

Priests and holy men call upon him during exorcisms. Other times, the likeness of the archangel is given as a gift on a silver pendant to someone in need.

The power of the Archangel Saint Michael in everyday life

We can call upon the Archangel Saint Michael in our times of need during prayer. He is a true guardian angel who is there for us in times of spiritual warfare. He is the protector of the faithful, and it is not uncommon for our faith to be shaken now and then.

When this happens, remember that Saint Michael is a powerful ally. As Christians, we will inevitably have times of crisis where we will need help. Recite his prayers for protection, sing his hymns, and rejoice in knowing of him and his love for the faithful.

For more information on angels, the Holy Spirit, and how they perform the work of our Lord Jesus Christ, download the Pray.com app on the iOS App Store and Google Play.